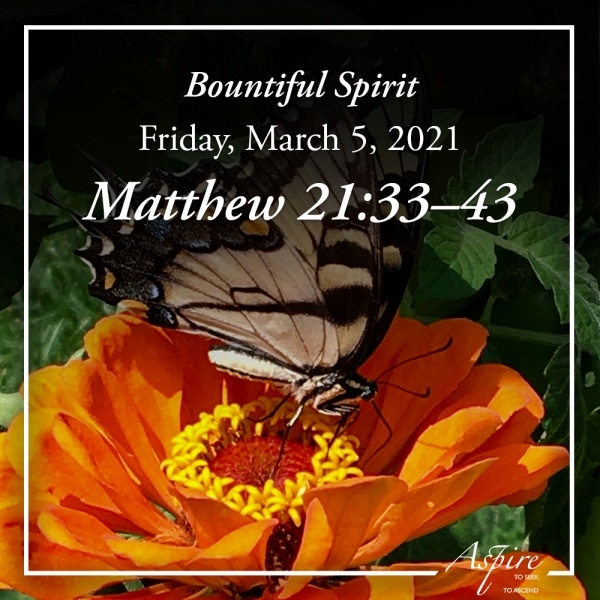 Jesus said, "Listen to another parable. There was a landowner who planted a vineyard, put a fence around it, dug a wine press in it, and built a watchtower. Then he leased it to tenants and went to another country. When the harvest time had come, he sent his slaves to the tenants to collect his produce. But the tenants seized his slaves and beat one, killed another, and stoned another. Again he sent other slaves, more than the first; and they treated them in the same way. Finally he sent his son to them, saying, `They will respect my son.' But when the tenants saw the son, they said to themselves, `This is the heir; come, let us kill him and get his inheritance.' So they seized him, threw him out of the vineyard, and killed him. Now when the owner of the vineyard comes, what will he do to those tenants?" They said to him, "He will put those wretches to a miserable death and lease the vineyard to other tenants who will give him the produce at the harvest time."

Jesus said to them, "Have you never read in the scriptures:

`The stone that the builders rejected has become the cornerstone;

this was the Lord's doing, and it is amazing in our eyes'?

“Therefore I tell you, the kingdom of God will be taken away from you and given to a people that produces the fruits of the kingdom.”

The book of Matthew employs these pithy statements of how God’s kingdom works, often through the use of parables.And, if we have ears to hear, it will subvert our notions of work, ownership, and entitlement.

Jesus, having just made his royal entrance into Jerusalem on a donkey, is now in the temple courts, talking to the chief priests and elders (21:23).And you can imagine Jesus’ eyes laser-focused on them as he speaks, with authority, in parables, on how the kingdom operates:

No mincing of words here.The chief priests and elders did not accept Jesus’ Gospel, and chose instead to cling to a gospel of status, power, and righteousness through good deeds.

The Gospel is good news for all of us. But lay a claim to ownership of it —through privilege, status, good deeds - and you miss it altogether.“Blessed are the poor in spirit, for theirs is the kingdom…” (Matthew 5:3)