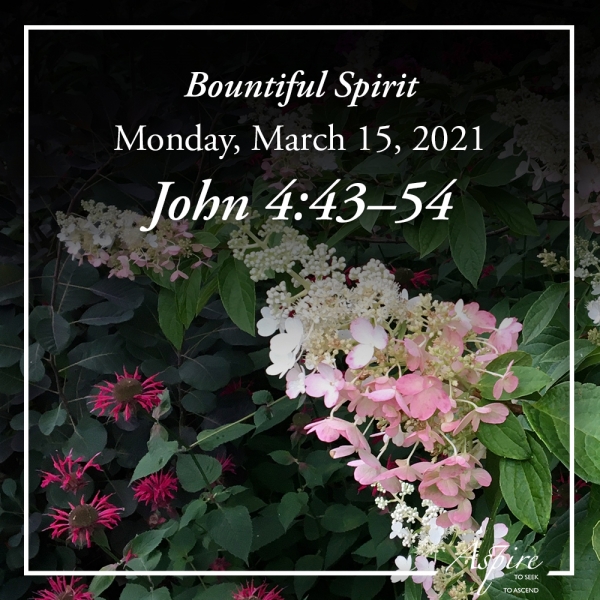 When the two days were over, Jesus went from that place to Galilee (for Jesus himself had testified that a prophet has no honor in the prophet’s own country). When he came to Galilee, the Galileans welcomed him, since they had seen all that he had done in Jerusalem at the festival; for they too had gone to the festival.
Then he came again to Cana in Galilee where he had changed the water into wine. Now there was a royal official whose son lay ill in Capernaum. When he heard that Jesus had come from Judea to Galilee, he went and begged him to come down and heal his son, for he was at the point of death. Then Jesus said to him, “Unless you see signs and wonders you will not believe.” The official said to him, “Sir, come down before my little boy dies.” Jesus said to him, “Go; your son will live.” The man believed the word that Jesus spoke to him and started on his way. As he was going down, his slaves met him and told him that his child was alive. So he asked them the hour when he began to recover, and they said to him, “Yesterday at one in the afternoon the fever left him.” The father realized that this was the hour when Jesus had said to him, “Your son will live.” So he himself believed, along with his whole household. Now this was the second sign that Jesus did after coming from Judea to Galilee.
Reflection by Rev. Douglas Rogers
As the years have passed, the Gospel written by John has become my favorite. It seems the writing style reflects one is present at events rather than someone recording stories that have been passed along. The words tend to draw me in, making me feel like a witness rather than simply a reader.
John’s verses ask us to visualize a wealthy man with influence and authority in the king’s court. He has traveled miles from his home to plead for the assistance of a small-town carpenter turned rabi. As improbable as this situation might seem, this man has no concern for the scorn his actions might bring from those in his own circle. His young son is near death, and he has heard stories of the miraculous deeds this Jesus has done.
Jesus has the ability to know when a person approaches in earnest, and recognizes a sincere need. Jesus sends the man away; with the assurance his son will live. The desperate man demonstrates the very essence of faith by his belief in what Jesus has told him. This event provides a model for our prayers. Be earnest in your words and sincere in your needs. The Lord will hear you.