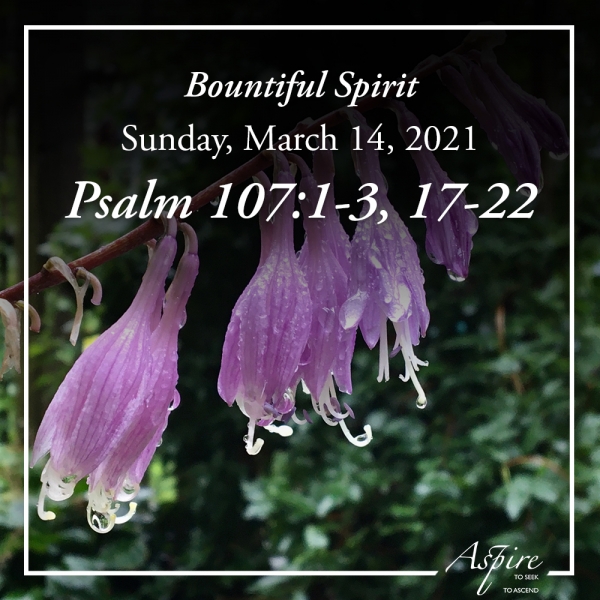 Give thanks to the Lord, for he is good, and his mercy endures forever.
Let all those whom the Lord has redeemed proclaim that he redeemed them from the hand of the foe.
He gathered them out of the lands; from the east and from the west, from the north and from the south.
Some were fools and took to rebellious ways; they were afflicted because of their sins. They abhorred all manner of food and drew near to death’s door.
Then they cried to the Lord in their trouble, and he delivered them from their distress.
He sent forth his word and healed them and saved them from the grave.
Let them give thanks to the Lord for his mercy and the wonders he does for his children.
Let them offer a sacrifice of thanksgiving and tell of his acts with shouts of joy.
Reflection by Stan McGroarty
God is still there to help us out, just for the asking - Joe Walsh, 1970s guitar god and internationally notorious destroyer of hotel rooms, reached out for help while touring in Australia, and, of course, wrote a song about it - “One Day at a Time.”
Joe says he only got drunk once - for 24 years. When, in 1973 a spot for a master guitarist/song writer opened up with the Eagles, not a flock, but arguably the world’s premier rock supergroup. Joe, then less than 40, got the nod, but there was a condition - he had to clean up his personal act to be in the group.
He tells the story in what for Joe is a hymn:

“Well you know, I was always the first to arrive at the party,
Oooh, and the last to leave the scene of the crime.
Well it started with a couple of beers,
And it went I don't know how many years,
Like a runaway train headed for the end of the line”

“Well I got down on my knees and said ‘hey,
I just can’t go on livin' this way.’
Guess I have to learn to live my life one day at a time.’
While on his knees, soul searching, Joe got some answers:

“Well I finally got around to admit that I was the problem,
When I used to put the blame on everybody's shoulders but mine.
All the friends I used to run with are gone,
Lord, I hadn't planned on livin' this long
But I finally learned to live my life one day at a time.”

“It was something I was too blind to see,
I got help from something greater than me,
And today I learned to live my life one day at a time.”

Joe’s rebound was epic, he’s been an Eagle for nearly thirty years now. He married Marjorie Bach and became Ringo Starr’s brother-in-law in 2008. Life is good. And, for Joe, with God’s help, sustainable. “ Let the redeemed of the Lord say so, whom he hath redeemed from the hand of the enemy; And gathered them out of the lands, from the east, and from the west, from the north, and from the south.” Amen.