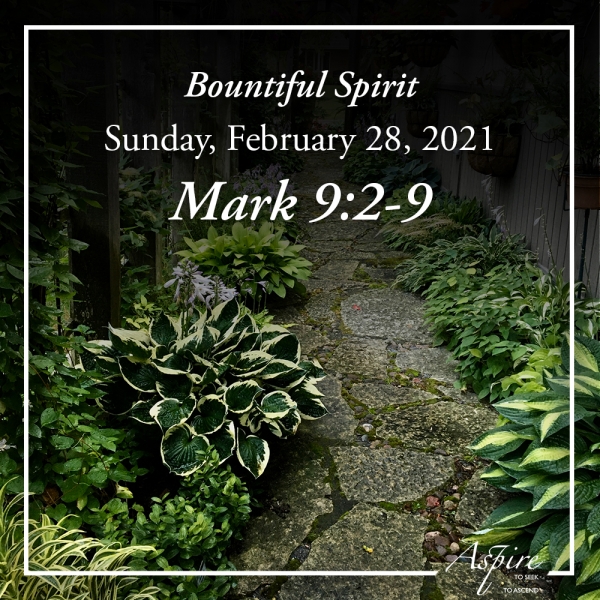 Six days later, Jesus took with him Peter and James and John, and led them up a high mountain apart, by themselves. And he was transfigured before them, and his clothes became dazzling white, such as no one on earth could bleach them.

And there appeared to them Elijah with Moses, who were talking with Jesus. Then Peter said to Jesus, "Rabbi, it is good for us to be here; let us make three dwellings, one for you, one for Moses, and one for Elijah." He did not know what to say, for they were terrified. Then a cloud overshadowed them, and from the cloud there came a voice, "This is my Son, the Beloved; listen to him!"

Suddenly when they looked around, they saw no one with them anymore, but only Jesus. As they were coming down the mountain, he ordered them to tell no one about what they had seen, until after the Son of Man had risen from the dead.

As we rode the carousel, we kept reaching for that shiny brass ring thinking it was gold. And when we caught it, we were so very pleased and excited. Then, we were told the ring itself was pretty worthless and we were disappointed. We didn't revel in the real prize, the accomplishment of capturing that ring.

The disciples were also blinded by the brightness and revelation of Jesus. But they saw only the tangible, physical element, not the real prize of the spirit. Isn't that so often how we get caught up in this life? We seek only the tangible rewards, money, fame, mansions, thinking these are the things that will make us happy. And after the fact, the ring loses its shine, the mansion has become a liability and in constant need of repair. Then, what is left when it disappears like Moses and Elijah? Jesus!

The teachings and wisdom of Jesus are quite enough for me to see I had the real prize all along, and these have never lost their shine.