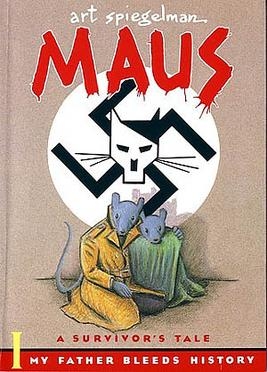 May's book is once again a banned title "Maus"

"Maus" is a nonfiction book presented in the graphic novel style, written by American cartoonist Art Spiegelman. Serialized from 1980 to 1991, it depicts Spiegelman interviewing his father about his experiences as a Polish Jew and Holocaust survivor. The work employs postmodernist techniques and represents Jews as mice, Germans as cats, Poles as pigs, Americans as dogs, the British as fish, the French as frogs, the Swedish as deer, and the Roma as butterflies. Critics have classified Maus as a memoir, biography, history, fiction, autobiography, or a mix of genres. - Wikipedia