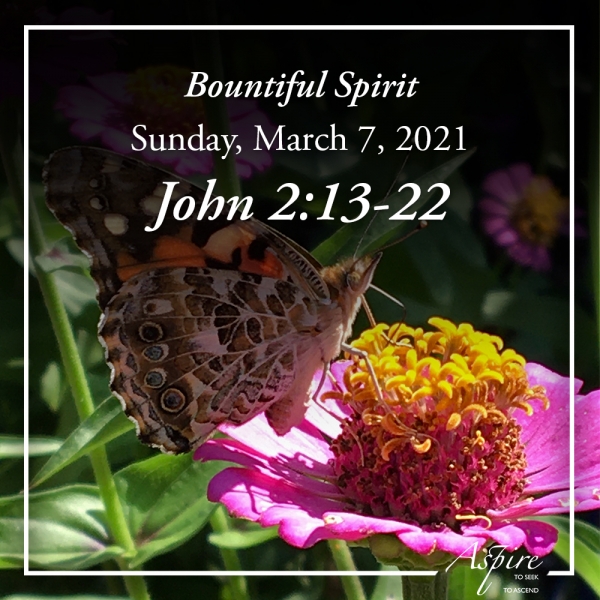 The Passover of the Jews was near, and Jesus went up to Jerusalem. In the temple he found people selling cattle, sheep, and doves, and the money changers seated at their tables. Making a whip of cords, he drove all of them out of the temple, both the sheep and the cattle. He also poured out the coins of the money changers and overturned their tables. He told those who were selling the doves, “Take these things out of here! Stop making my Father’s house a marketplace!” His disciples remembered that it was written, “Zeal for your house will consume me.” The Jews then said to him, “What sign can you show us for doing this?” Jesus answered them, “Destroy this temple, and in three days I will raise it up.” The Jews then said, “This temple has been under construction for forty-six years, and will you raise it up in three days?” But he was speaking of the temple of his body. After he was raised from the dead, his disciples remembered that he had said this; and they believed the scripture and the word that Jesus had spoken.

In this passage, ﻿John told the story of when, near Passover, Jesus visited a busy Jerusalem temple. The temple was not a place of worship but had been turned into an economic marketplace. It was full of animals and birds and a crude bank. It was nothing like Jesus’ vision of a religious temple.

Jesus made a whip out of cords and drove everyone and everything out of the temple marketplace. Jesus implored the Jews to never use his Father’s Temple as a marketplace again...but the Jews wanted a sign. Jesus spoke, “Destroy this temple and in 3 days I will raise it up.” This shocked the Jews because they knew the Temple had taken 46 years to be built. But Jesus was metaphorically speaking of his body, not of the capitalist temple; his disciples remembered this about the three days after he had died.