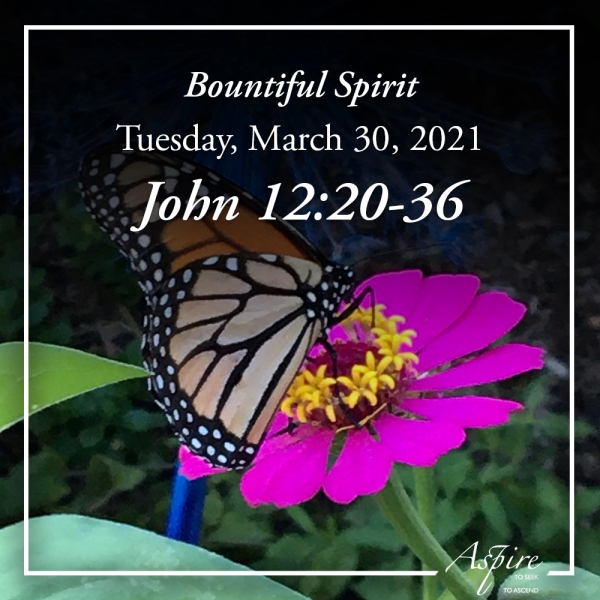 Among those who went up to worship at the festival were some Greeks. They came to Philip, who was from Bethsaida in Galilee, and said to him, “Sir, we wish to see Jesus.” Philip went and told Andrew; then Andrew and Philip went and told Jesus. Jesus answered them, “The hour has come for the Son of Man to be glorified. Very truly, I tell you, unless a grain of wheat falls into the earth and dies, it remains just a single grain; but if it dies, it bears much fruit. Those who love their life lose it, and those who hate their life in this world will keep it for eternal life. Whoever serves me must follow me, and where I am, there will my servant be also. Whoever serves me, the Father will honor.
“Now my soul is troubled. And what should I say-- `Father, save me from this hour’? No, it is for this reason that I have come to this hour. Father, glorify your name.” Then a voice came from heaven, “I have glorified it, and I will glorify it again.” The crowd standing there heard it and said that it was thunder. Others said, “An angel has spoken to him.” Jesus answered, “This voice has come for your sake, not for mine. Now is the judgment of this world; now the ruler of this world will be driven out. And I, when I am lifted up from the earth, will draw all people to myself.” He said this to indicate the kind of death he was to die. The crowd answered him, “We have heard from the law that the Messiah remains forever. How can you say that the Son of Man must be lifted up? Who is this Son of Man?” Jesus said to them, “The light is with you for a little longer. Walk while you have the light, so that the darkness may not overtake you. If you walk in the darkness, you do not know where you are going. While you have the light, believe in the light, so that you may become children of light.”
After Jesus had said this, he departed and hid from them.
Reflection by Tyler Hillman
Hear Jesus telling his disciples he knows he will be killed by Rome at the instigation of the Temple authorities. They have left the house of Lazarus in Bethany, which is only a few miles from Jerusalem, to worship at the Temple and celebrate the Passover. Even though the disciples have seen His power – they were just guests in the house of a man Jesus has raised from the dead – now the word has spread beyond their group and even Greeks that have traveled to Jerusalem have heard of and want to see Jesus. He knows that now is the time for Him to tell them that not only will He be killed, but that He must be killed to fulfill the prophecies of the Messiah and to demonstrate God’s power when He is resurrected. He tells the people that God has spoken for their sake, not for His. His light is the guiding force that God has sent to His people, and to the whole world, and by this light they can leave the darkness of their earthly life behind. Those that love Jesus, and follow His word and example, will be honored by the Father and will be raised as well.