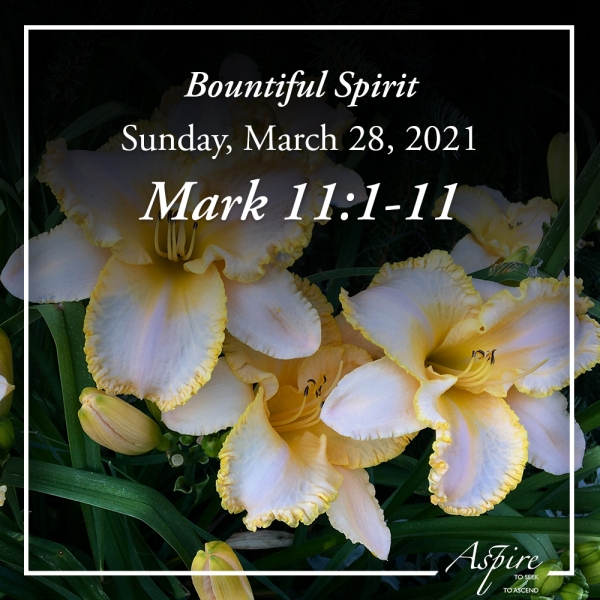 When they were approaching Jerusalem, at Bethphage and Bethany, near the Mount of Olives, Jesus sent two of his disciples and said to them, “Go into the village ahead of you, and immediately as you enter it, you will find tied there a colt that has never been ridden; untie it and bring it. If anyone says to you, ‘Why are you doing this?’ just say this, ‘The Lord needs it and will send it back here immediately.’” They went away and found a colt tied near a door, outside in the street. As they were untying it, some of the bystanders said to them, “What are you doing, untying the colt?” They told them what Jesus had said, and they allowed them to take it. Then they brought the colt to Jesus and threw their cloaks on it; and he sat on it. Many people spread their cloaks on the road, and others spread leafy branches that they had cut in the fields. Then those who went ahead and those who followed were shouting,
“Hosanna!
Blessed is the one who comes in the name of the Lord!
Blessed is the coming kingdom of our ancestor David!
Hosanna in the highest heaven!”
Then he entered Jerusalem and went into the temple; and when he had looked around at everything, as it was already late, he went out to Bethany with the twelve.
Reflection by Rev. Diane Tomlinson
Every Palm Sunday, the Liturgy begins on a high note. The people wave branches and throw down their cloaks before Jesus, swaying side to side on a fat donkey, his feet barely clearing the dusty road. The people lining the streets press in on him and shout He is blessed in the name of the Lord. We know what waits around the corner, though, and it is with a sense of dread we begin our morning worship. Jesus riding high will soon be forsaken by all, abandoned by those closest to Him.
Haven’t we, too, experienced this type of abandonment at some point in our lives? One moment riding high like Jesus, friends, and colleagues singing our praises until suddenly they are not. We, like Jesus, are shunned by those we thought understood us and respected us. Mystified, we are justifiably hurt and angry. Jesus, though, does those reactions. Throughout the entire Passion story, He is calm and in charge of his emotions.
The late author and motivational speaker Stephen Covey often spoke about carrying our weather inside us. Whatever is going on around us, we remain calm and the master of our emotions. Jesus exemplifies Stephen Covey’s words and does not engage. Jesus stands mute before all. It must have been difficult because, as a human, He would have wanted to justify himself. I imagine him standing silent before all, thinking to himself, the only person he had to explain himself to was his Father in heaven. We, too, have the same responsibility; the only one we need to explain ourselves to is the One.