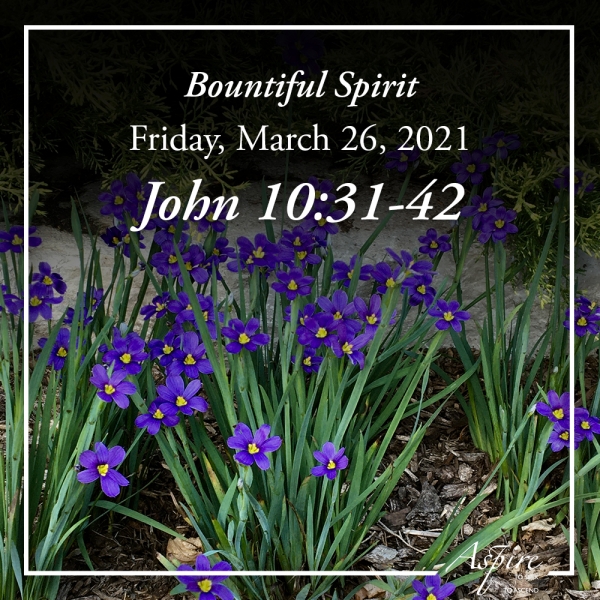 The Jews took up stones again to stone him and Jesus replied, ‘I have shown you many good works from the Father. For which of these are you going to stone me?’ The Jews answered, ‘It is not for a good work that we are going to stone you, but for blasphemy, because you, though only a human being, are making yourself God.’ Jesus answered, ‘Is it not written in your law, ‘ I said, you are gods’? If those to whom the word of God came were called “gods”—and the scripture cannot be annulled—can you say that the one whom the Father has sanctified and sent into the world is blaspheming because I said, “I am God’s Son”? If I am not doing the works of my Father, then do not believe me. But if I do them, even though you do not believe me, believe the works, so that you may know and understand that the Father is in me and I am in the Father.’ Then they tried to arrest him again, but he escaped from their hands.
He went away again across the Jordan to the place where John had been baptizing earlier, and he remained there. Many came to him, and they were saying, ‘John performed no sign, but everything that John said about this man was true.’ And many believed in him there.
Reflection by Millie Zimmerman
In this passage, we are told that the Jews were angry, afraid, and picking up stones to throw at Jesus Christ. Charismatic leaders can be disruptive, but this confrontation goes beyond persona. It is about Christ’s declaration that he is the Son of God. Our potential responses to this can be two-fold.
First, we can choose to accept and believe that Christ is God incarnate. Not such a stretch for us in a comfortable pew. For the Jews, it was a revolution. For the non-believer, it is a radical change.
Secondly, we may consider the works of Christ. He tells the Jews and us, that if we do not believe in his works, then we will not believe in him. His point is, if he is doing the works of God, then God is in him.
This second response is approachable for us. We can read the parables, the sermons, and review Christ’s actions. We can emulate his kind behaviors. Does that mean God might be in us or at least with us? It isn’t necessary to be charismatic. Humility is advised. Let’s just focus on the ordinary human approach to the tasks of Christianity, knowing that Christ was made man to lead the way.