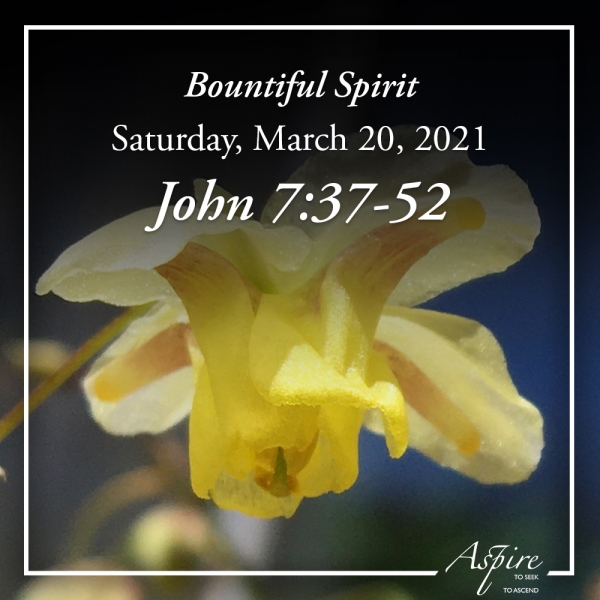 On the last day of the festival, the great day, while Jesus was standing there, he cried out, ‘Let anyone who is thirsty come to me, and let the one who believes in me drink. As the scripture has said, “Out of the believer’s heart shall flow rivers of living water.” ’ Now he said this about the Spirit, which believers in him were to receive; for as yet there was no Spirit, because Jesus was not yet glorified.
When they heard these words, some in the crowd said, ‘This is really the prophet.’ Others said, ‘This is the Messiah.’ But some asked, ‘Surely the Messiah does not come from Galilee, does he? Has not the scripture said that the Messiah is descended from David and comes from Bethlehem, the village where David lived?’ So there was a division in the crowd because of him. Some of them wanted to arrest him, but no one laid hands on him.
Then the temple police went back to the chief priests and Pharisees, who asked them, ‘Why did you not arrest him?’ The police answered, ‘Never has anyone spoken like this!’ Then the Pharisees replied, ‘Surely you have not been deceived too, have you? Has any one of the authorities or of the Pharisees believed in him? But this crowd, which does not know the law—they are accursed.’ Nicodemus, who had gone to Jesus before, and who was one of them, asked, ‘Our law does not judge people without first giving them a hearing to find out what they are doing, does it?’ They replied, ‘Surely you are not also from Galilee, are you? Search and you will see that no prophet is to arise from Galilee.’
Reflection by Jamie Terra Hawk
Eat! Drink! Make merry! But does anyone know where it all comes from? Or do they even care, as long as they get what they want? Living water? The equivalent of TRUTH, but well hidden in the hearts of mankind. What can open the gates and allow it to flow? They knew this "man" from Galilee, the Nazarene, the carpenter's son. And some judged him as a good man, while others sowed the seeds of contempt and nurtured it with jealousy and fear to confuse and recruit others to seek his blood.
Oh Nicodemus! Are you so naive as to believe that men are pure of heart and obedient to the law? You say, ‘Our law does not judge people without first giving them a hearing to find out what they are doing, does it?’ But the answer is yes. Yes, it does! TRUTH! The one virtue, a.k.a. Jesus, that will set all of us free of the bondage of self. The Living Water that will make our souls thirst no more for the desires of earthly things. TRUTH? I am blessed!