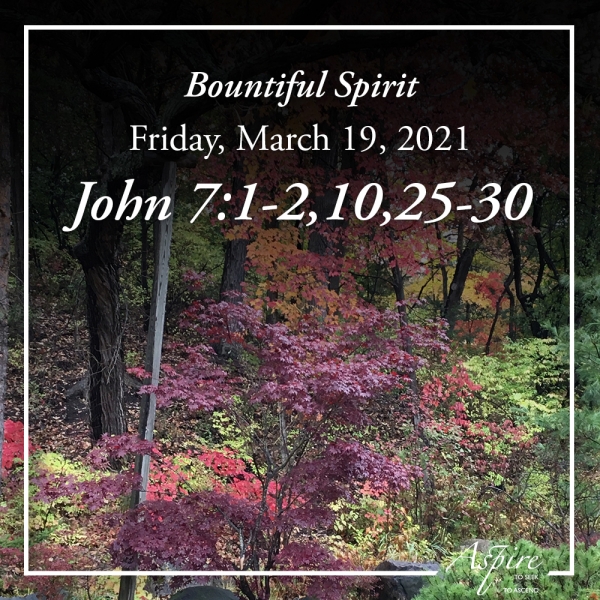 After this Jesus went about in Galilee. He did not wish to go about in Judea because the Jews were looking for an opportunity to kill him. Now the Jewish festival of booths was near. But after his brothers had gone to the festival, then he also went, not publicly but as it were in secret.
Now some of the people of Jerusalem were saying, ‘Is not this the man whom they are trying to kill? And here he is, speaking openly, but they say nothing to him! Can it be that the authorities really know that this is the Messiah? Yet we know where this man is from; but when the Messiah comes, no one will know where he is from.’ Then Jesus cried out as he was teaching in the temple, ‘You know me, and you know where I am from. I have not come on my own. But the one who sent me is true, and you do not know him. I know him, because I am from him, and he sent me.’ Then they tried to arrest him, but no one laid hands on him, because his hour had not yet come.
Reflection by John Torrence
As the book of John progresses, we learn more about who Jesus says He is. At first, He seems like a wise prophet. Then He performs miracles. Now He has proclaimed that not only is He the Jewish Messiah but also the “bread of life from heaven”, and the only way to the Father is through Him!! This is now becoming more than most people can take. Many will leave him at this juncture in His ministry.
It has been said that there are many different ways of listening: the listening of criticism, of resentment, of superiority, and defensiveness. How are we to listen to Jesus?
Prayer: Lord, help us to listen to your Word with humility. We thank you for your Holy Spirit, who can guide us to the Truth. Despite what the world wants us to believe, help us each day to make that personal commitment to go all out for You. Thanks be to God! Amen.