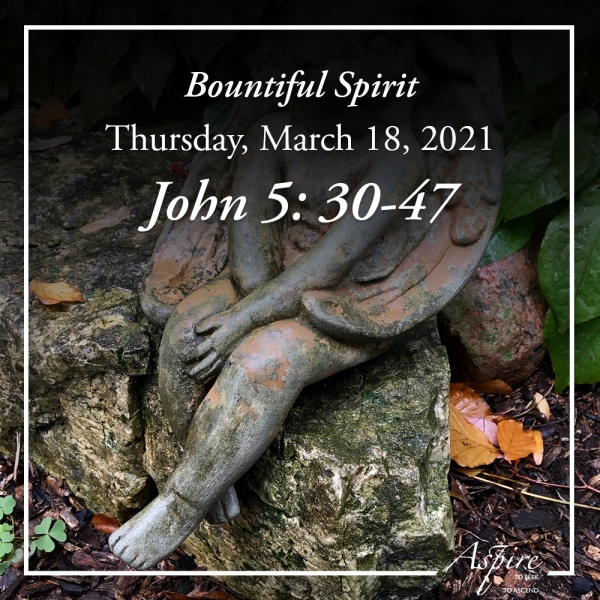 ‘I can do nothing on my own. As I hear, I judge; and my judgement is just, because I seek to do not my own will but the will of him who sent me.
‘If I testify about myself, my testimony is not true. There is another who testifies on my behalf, and I know that his testimony to me is true. You sent messengers to John, and he testified to the truth. Not that I accept such human testimony, but I say these things so that you may be saved. He was a burning and shining lamp, and you were willing to rejoice for a while in his light. But I have a testimony greater than John’s. The works that the Father has given me to complete, the very works that I am doing, testify on my behalf that the Father has sent me. And the Father who sent me has himself testified on my behalf. You have never heard his voice or seen his form, and you do not have his word abiding in you, because you do not believe him whom he has sent.
‘You search the scriptures because you think that in them you have eternal life; and it is they that testify on my behalf. Yet you refuse to come to me to have life. I do not accept glory from human beings. But I know that you do not have the love of God in you. I have come in my Father’s name, and you do not accept me; if another comes in his own name, you will accept him. How can you believe when you accept glory from one another and do not seek the glory that comes from the one who alone is God? Do not think that I will accuse you before the Father; your accuser is Moses, on whom you have set your hope. If you believed Moses, you would believe me, for he wrote about me. But if you do not believe what he wrote, how will you believe what I say?
Reflection by Rev. Douglas Rogers
In these verses we find Jesus has returned to Jerusalem and has been healing and teaching throughout the city. But the people seem more interested in miracles than they do his message, and the temple authorities are greatly offended after Jesus claims the authority to pass judgement on the people. He tries to explain that only God is perfect and therefore only God is capable of a fair and unbiased judgement. Jesus says as the son of God this ability has been granted to him.
But the temple authorities reject his words and refuse to accept his claims of divinity. Jesus tells them they search through the scriptures expecting to find their salvation within, but by rejecting him they are also rejecting God. He tells them it is not he who accuses them, but it is in fact Moses who Jesus says wrote about his coming into the world. If they do not believe Moses, how can they believe in Jesus. Their lack of faith will condemn them and cause them to demand the death of Jesus. How often does our lack of faith lead to results we regret?