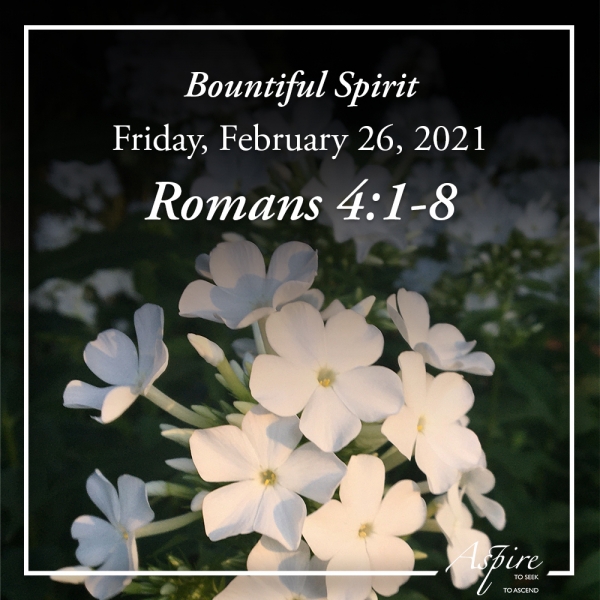 What then shall we say that Abraham, our forefather according to the flesh, discovered in this matter? If, in fact, Abraham was justified by works, he had something to boast about—but not before God. What does Scripture say? “Abraham believed God, and it was credited to him as righteousness.”
Now to the one who works, wages are not credited as a gift but as an obligation. However, to the one who does not work but trusts God who justifies the ungodly, their faith is credited as righteousness. David says the same thing when he speaks of the blessedness of the one to whom God credits righteousness apart from works: “Blessed are those whose transgressions are forgiven; whose sins are covered. Blessed is the one whose sin the Lord will never count against them.”
Reflection by Lynn Rynkewicz
Abraham was credited by God as righteous because of his works and faith, in which he did not boast. Let's go to Abraham’s life and the promises God made to him, especially when God told him that Sarah would bear him a son. Because Abraham was very old and Sarah had not been able to have children, God’s message was something he could not comprehend. When he told Sarah what God had promised, she probably thought he was crazy and then sent her handmaid to Abraham. The handmaid became pregnant but so did Sarah, resulting in two sons, Esau and Isaac. Abraham believed and trusted in God’s word, that Sarah would give him a son, even when Sarah didn’t.
“ Faith” is believing in something which one cannot comprehend. How can anyone put a limited explanation on faith? Everyone's faith is different and may vary through one’s life. Jesus said that “ if one has faith the size of a mustard seed” you can move mountains. So, it’s not about the amount of faith you have, but that you have faith.
In many Native American cultures “The Great Spirit” (God) is call the Incomprehensible One; there is no explaining God in human terms. When I look around, I know and believe I am a part of something much larger than I could ever explain.
Often, I’m asked why I do certain things and most of the time my response is, “because it’s the right thing to do”. Sometimes I don’t get recognized for my work and I develop an attitude, then must remind myself I am not here for recognition. I am here to serve others. I have faith. I am doing what is right and trying to emulate Christ. To boast and receive recognition would make me no better than the Pharisees and Sadducees praying in public in hopes of receiving praise. Remember Jesus calls them white-washed sepulchers full of dead men's bones.
So have faith my sisters and brothers in these uncertain times, for God is always walking with us. We just need to stop and listen to how we are part of something much greater than ourselves.